Back in 2015, when the first Apple Watch was released, it was a game-changer. The watch faced very little competition in the market and was miles ahead of its closest rival, the Pebble. Over time, however, the competition has caught up and there are now several worthy challengers (from brands like Garmin, Fitbit, and Samsung) to the Apple Watch’s throne. One of these is the Garmin Venu 2 released in April 2021.

Here, we will compare Apple Watch Series 8 vs Garmin Venu 2 and find out whether Apple has managed to retain its lead or if Garmin has managed to close the gap.

Garmin watches are known for their high price tags, and the Venu 2 Series is no different. Both Venu 2 and 2S were initially priced at $399.99, but you can get each one of them with around a $50-100 discount on major e-commerce stores. Earlier this year (2022), Venu 2 Plus hit the market with a price tag of around $450. 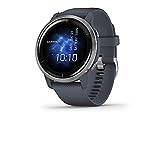 Apple Watch Series 8, on the other hand, starts at $399 for the GPS-only version (41 mm case) and goes up to $499 for the cellular version. The 45mm case costs $30 extra as, unlike Garmin, Apple rightfully differentiates between two watch sizes in terms of pricing. After all, the small size means a smaller battery, and therefore, people with small wrists are at a disadvantage. 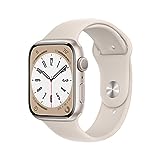 In the design department, Apple Watch 8 is not so different from its predecessor. It has the same squircle casing with a thin bezel around the screen and a digital crown and a button on the right side. The tech giant has reserved the titanium casing for the Apple Watch Ultra edition, so now there are only two options: aluminum and stainless steel.

The watch comes in multiple colors (midnight, starlight, silver, and more) and swappable bands so you can personalize your device. It is water resistant for up to 50m meaning you can use it while swimming. The screen doesn’t get the sapphire glass of Ultra Edition, but it is fairly crack-resistant.

The Venu 2, on the other hand, has a circular design and is made from reinforced polymer (plastic) except for the bezel that’s made of stainless steel. The plastic build contributes to durability, however, it gives the device a little less of a premium feel. Our main gripe with the design is that it is slightly thicker and heavier than the Apple Watch despite having a plastic casing.

Venu 2 series comes in three sizes (Venu 2S–40mm, Venu 2 Plus–43mm, Venu 2–45mm) and several color options. Unlike Apple, there is a little more flexibility in the choice of colors and sizes. The display is protected by Corning Gorilla Glass 3, and the watch is water-resistant for up to 50m.

Both watches share AMOLED display technology and almost similar screen resolution. The Apple Watch 8 has an Always-On Retina display that’s bright and colorful, and the Venu 2 also has a full-color AMOLED display. We think both watches look great, but the iWatch is slightly better in terms of vibrancy and overall clarity.

As far as the smart features are concerned, Apple Watch Series 8 remains the dominant force, just like its predecessors Series 7, Series 6, and Series 5. Its user interface, now being updated with the new WatchOS9, has no match in the market.

Garmin Venu 2 goes with the essentials like music storage and streaming, NFC payments through Garmin Pay, and notification alerts. Venu 2 Plus added voice assistant support and Bluetooth calling into the mix. The Garmin watches can be connected to both iOS and Android, which so far remains to be the best thing about them.

Apple beats Garmin in every feature we discussed above and offers plenty of exclusives to its audience. Apple Play Store has the largest collection of third-party apps, iWatch can make standalone calls and texts, and no other watch can match the seamless integration with iPhone. Moreover, the watch offers excellent safety features that have now been updated with a new Crash detection alert.

In health monitoring, Garmin had previously offered more comprehensive data, but that advantage has now been negated by the new sleep tracking ability in the WatchOS9.

Apple was always at par or somewhat superior to Garmin as far as the sensors were concerned, but now the firmware has been streamlined to take full advantage of these powerful sensors. Both watches can monitor heart rate, sleep, stress level, and blood oxygen saturation (SpO2). We have read several reviews by DCrainmaker, Androidauthority, and Techradar, and the health monitoring by both brands is pretty much at par.

Apple Watch 8 has an ECG sensor that can detect potential health issues related to the heart (aFib Detection). Apple’s ECG app is FDA approved in the US, while Garmin’s ECG feature is only alive in the rumors.

We have written a separate post where we discussed how the new workout profiles and comprehensive set of metrics in the WatchOS9 are going to give Garmin a tough time. Well, Watch OS9 has arrived, and we will soon be able to comment on whether it was successful in its mission or not.

Garmin Venu 2 and 2S offer almost two-week-long battery life in smartwatch mode, whereas the Apple Watch 8 offers only 36 hours. These claims are official, and we all know that in real-world usage, the numbers are often lower. Still, there is a significant gap between the two, enough to declare the Garmin Watch winner.

Both watches support fast charging so Apple can’t leverage that as a selling point.

We might have given Garmin  Venu 2 Series an edge over the Apple Watch 8 if the targeted audience was different. But when we compare these two smartwatches, it is hard to find a reason why one would buy the Venu 2 over the Apple Watch 8, especially when you own an iPhone. The latter does everything better, from the build quality to the feature set. Unless you are a diehard fan of Garmin or looking for better battery life, buying the Apple Watch 8 is a no-brainer. 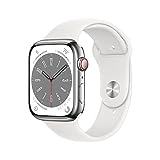