Garmin has recently released new models in its high-end Fenix and Tactix lineup, with a price tag that will surely make your wallet weep.

Fenix 7X like its predecessor, Fenix 6, is a multisports watch, mainly famous for its outdoor tracking capabilities, while the Tactix 7 Pro is a military-grade GPS watch that is mainly designed for the activities of tactical operation.

These two watches might differ slightly in their appearances, but they are fundamentally the same watch. In fact, some call Tactix 7 Pro a fine-tuned version of Fenix 7X for military men, hunters, and aviation experts.

If you are looking for a smartwatch with tactical and outdoor features, then both Fenix 7X and Tactix 7 Pro will be a great option for you. But if you have to choose one, then it all depends on your needs and preferences.

Here, we will compareGarmin Fenix 7X vs Garmin Tactix 7 Pro, so that you can decide which one is the best for you. There is no need to write the similarities between the two as that list is long and boring. We will only discuss their key differences. 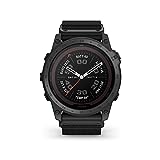 So Fenix 7X and Garmin Tactix Pro have an almost $300 difference in price (You can buy Apple Watch SE at less price than this). 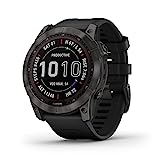 Garmin justifies that price difference by offering two premium straps instead of one (Silicon + Nylon) with Tactix 7 Pro, plus of course, a few tactical features.

There is not much difference in the design of these two watches. Both are rugged and made to withstand rough and tough outdoor conditions. However, there are a few small differences that set them apart.

The bezel around the screen of Tactix 7 Pro is flat and has hours markers around it, while the bezel of Fenix 7X is slightly raised and beveled, and has button-identifiers (e.g. Start).

Moreover, the buttons on Tactix 7 watches are slightly knurled to make them easy to operate with gloves on. The buttons on Fenix 7X are not as textured, but they are still easier to press when you’re wearing gloves.

Both Watches come with LED Flash Light, but their color combinations differ. Tactics 7 Pro has a green and white LED, whereas in Fenix 7X you get a red and white LED.

This is where the Tactix 7 shines. It comes loaded with features that are designed for tactical operation. Some of these features include Night Vision Mode (dim backlight), Stealth Mode (which disables all GPS and communications), and Kill Switch (to wipe out all the data). If you go with the Tactix 7 Ballistic, you will get the ‘Applied Ballistics’ feature that allows you to calculate the trajectory of your bullet.

Garmin Tactix 7 Pro has ‘Fly’ as an additional workout profile, definitely targeted at aviation experts or those into aviation sports. The Fenix 7X doesn’t have any such features. The activity allows you to monitor your elevation, compass, heart rate, stress, and a couple of other metrics. This activity even offers maps to help you land the airplane.

Only a few people will appreciate the features of the Garmin Tactix 7 Pro over the Fenix 7X. If you are not into military or tactical operations and have nothing to do with hunting or aviation sports, there is no point in spending the extra money on Tactix 7 Pro. You can save those extra bucks to buy replacement bands for your Fenix 7X watch.