Fitbit and Garmin make two obvious rivals when it comes to fitness trackers and smartwatches. While Fitbit is targeting primarily health and wellness with its devices, Garmin takes a different angle by offering more comprehensive features for athletes and outdoor enthusiasts.

However, Garmin doesn’t compromise on health and wellness tracking, so its devices usually offer the best of both worlds.

The Garmin Forerunner 255 is the latest watch by the company, released this month after a 3-year long wait since Forerunner 245. It offers comprehensive tracking features for running, biking, swimming, and more. Plus, there are plenty of new health metrics included in this watch.

Fitbit Sense is considered the best Fitbit watch so far. It was released last year and offers health tracking features like stress management, skin temperature, and heart rate variability. Plus, there are also new fitness features like Active Zone Minutes and swim tracking.

You must have a brief introduction of both watches by now, let’s pit Garmin Forerunner 255 vs Fitbit Sense and see which one comes out on top. 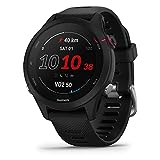 These watches differ greatly from design to functionality, so a detailed comparison is necessary to make the best decision.

The Garmin Forerunner 255 will cost you around $350, while the Fitbit sense is priced at around $300. However, Fitbit Sense’s price drops regularly by about $50-100 so there are good chances you can find it for a lower price.

There is a musical version of the Forerunner watch too, that would cost you an extra $50.

The Garmin Forerunner 255 has a traditional watch design with a circular face and a silicone strap. Its casing is made of fiber-reinforced polymer and the screen is protected by Gorilla Glass 3 the same screen protection as on the Fitbit watch. In addition to this, the watch has 5 physical buttons for navigation.

The Fitbit sense, on the other hand, has a more modern look with a square face and aluminum case. There is a haptic button on the side, but most of the navigation is done on the touchscreen display. In a head-to-head comparison, Fitbit Sense has more aesthetic appeal than Forerunner.

The Garmin Forerunner 255 Series watches have transflective memory-in-pixel (MIP) displays, just like the predecessor 245 Series. This kind of display is suitable for outdoor use as it’s readable even in direct sunlight.

The Fitbit Sense has a 1.58-inch lush AMOLED touchscreen display with a resolution of 336 x 336 pixels. In the display department, Fitbit has more or less followed the Apple Watch where the user interface looks very attractive.

The Fitbit Sense display wins when it comes to visuals and attractiveness, but the transflective display of Forerunner is more practical as it can be read even in bright sunlight.

As mentioned earlier, both watches have excellent health tracking features. Let’s see how they compare against each other.

Garmin offers almost all the health features of Fitbit. It can track heart rate, sleep, stress, respiratory rate, and more. However, there is one major health feature where it falls short and that’s ECG monitoring.

The ECG sensor on the Fitbit Sense allows it to take an electrocardiogram which can be used to detect atrial fibrillation (AFib). Fitbit has an FDA clearance for its ECG app which puts Forerunner 255 and even its bigger siblings like FR955 and Fenix 7 at a disadvantage.

In terms of accuracy, the data from Fitbit and Garmin watches is more or less the same.

Both watches have excellent fitness tracking features, but there are some differences worth mentioning.

The Garmin Forerunner 255 has dedicated modes for running, cycling, swimming, and more. It is Garmin’s first mid-range watch for triathlons.

The Fitbit sense also has dedicated modes for different sports, but its main focus is on daily activity and fitness rather than multi-sport tracking.

The Garmin Forerunner 255 can store up to 500 songs on the watch. You can create playlists from popular streaming services like iHeartRadio, Spotify, and Deezer. The Fitbit sense also allows you to store and play music on the watch.

However, Fitbit is also capable of making Bluetooth calls directly from the watch. This is not possible on any Forerunner watch so far as there is no speaker and mic onboard.

Also, you get two voice assistants from both Google and Amazon on the Fitbit watch,  whereas, on Garmin, you get none. If that is a must for you, Garmin Venu 2 Plus is a better pick than Forerunner 255.

Garmin Watch offers almost double the performance of Fitbit in terms of battery life. Here is a breakdown of their battery performance.

Garmin Forerunner 255: Up to 30 hours in GPS mode and 14 days in smartwatch mode

However, Fitbit counters this with ‘Fast Charging’ support on the watch. You can get a full day’s charge in just 12 minutes.

The ultimate choice between these two comes down to your needs and preferences. If you are looking for a watch with comprehensive health tracking and attractive looks, and value for money, the Fitbit sense is a better pick.

On the other hand, if all you want is sports tracking with all the performance and training metrics that can help you take your game to the next level,  Forerunner 255 is our ultimate choice.

To pick one winner between the two is difficult for us as both watches are targeting a slightly different market.