Garmin released the two most important watches in Fenix and Forerunner series in the first half of the year 2022. Garmin Forerunner 955 which claims the be the best watch for advanced runners followed the release of Garmin Fenix 7 , a multisport beast in its own right.

There are many similarities between the two watches but there are also enough differences that make these watches appeal to different types of athletes.

In this post, we will pit Garmin Forerunner 955 vs Garmin Fenix 7 to decide once and for all which watch is worth your investment.

Garmin Forerunner 955 has two models (Solar and Base), whereas Fenix 7 has three models in terms of sizes (7S, 7, and 7X) which are also divided into Solar, Sapphire, and Standard edition.

For our ease, we will compare Garmin Forerunner 955 Solar with Garmin Fenix 7 Solar Edition. This way, we will be able to see the differences between these two watches more clearly.

Generally speaking, Garmin Fenix 7 Series is more expensive than the Forerunner 955. Here is the detailed list of prices 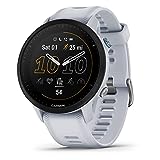 If you keep the same size of both watches and pick the solar model, there is roughly a $200 premium you have to pay for the Fenix watch over the FR 955. 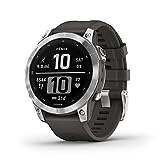 Fenix 7 watch is distinguishable by the stainless steel/titanium bezel and back plate. Plus it has the iconic visible screws and rugged look of the Fenix series. Forerunner 955 counters this by being on the lighter side, and thus highly suitable for runners.

Apart from this, both watches have almost 90% overlap in the design and display, where they feature the same resolution MIP touchscreen, gorilla glass in the base models, and 5 buttons for old-school navigation.

The battery performance of Fenix 7 Series watches is a tad better than that of Forerunner 955. If we compare only the Solar editions of both watches, Fenix 7 Solar can last for 22 days on smartwatch mode, whereas FR 955 follows closely at 20 days stamina.

The new solar edition of FR955 has really axed the appeal of Fenix 7 for triathletes and ultramarathoners.

Garmin has added several new performance and training metrics in FR955 which for now are exclusive to only Forerunner Series. However, we are quite skeptical about giving FR955 an advantage here as sooner or later the company is going to add these features to its high-end Fenix and Epix Series watches.

Let’s discuss the new features of FR 955 one by one:

Both watches share so much in common that if I have to make a list, it would take me 5 times more content than this short comparison to complete it. For runners and triathletes, Garmin Forerunner 955 is our ultimate choice between the two watches.

For hiking, mountaineering, trail running, or any activity that involves a lot of hazards, we would recommend the Fenix 7 Series. Its rugged look and firepower under the hood are totally worth the premium price tag.