The Big Wear OS update would be the end of many watches and their operating system. Samsung Galaxy Watch 3 & Active 2 running on Tizen OS, Fitbit Sense and Versa 3 powered by FitbitOS, and even the old Wear OS watches like Ticwatch S2, Fossil Gen 5, and so on; they all are going to be history. There would be updates by their respective companies for a year or two, but eventually, they all would bite the dust.

The only two watches that are going to get the update to Wear 3.0 are by the Chinese Manufacturer Mobvoi: Ticwatch E3 & Ticwatch Pro 3 (GPS & 4G/LTE). And that has not been made possible by sheer luck. Mobvoi was quick to adapt to the new, powerful chip by Qualcomm: the Snapdragon Wear 4100, and almost all its latest watches in the Ticwatch Series have it. This combined with 1GB RAM has made its wearable future-proof.

Now getting to the elephant in the room, Ticwatch E3 & Pro 3 GPS are only two watches with Snapdragon Wear 4100. They have many other features and specs in common of which the most prominent ones include Wear OS Platform, Storage and RAM, Water resistance, Charging Cable, and a couple of sensors.

Ticwatch E series is branded as low-end watches, and so the E3 is priced $100 lower than the premium Ticwatch Pro 3 GPS & 4G/LTE. Other than this, there are other slight differences in design, display & battery performance which we are going to discuss in a while.

The following table would give you a quick introduction to both these watches. We have also included a separate comparison table with each aspect of the watch. So without further ado, let begin with our comparison.

Note: Ticwatch Pro 3 has two variants (GPS & 4G/LTE). We have taken the GPS model for our comparison, and for the sake of brevity, we would call it only Ticwatch Pro 3. 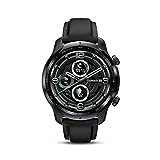 In the design department, these watches differ largely, but in essence, both of them are chunky wearable with a thick casing that protrudes from your wrist. We can safely dedicate them to people with bulky wrists.

Ticwatch E3 is relatively small in size, but thicker. It comes with stubby, squared-off lugs attaching a quick release 20mm strap to the simple round case, which is made of plastic. The watch is made in two colors, black, and silver. Whereas in Pro 3, Mobvoi made fine use of matte black metal case, plastic back, and black glossy dial, thus making the watch slightly more refined in looks. Pro 3 comes with a 22mm interchangeable strap.

On the back of these watches, you will find a heart rate and SpO2 sensor, opening for speaker and mic. There you would always find the notorious pins for charging. (Most people including me feels that they are at the wrong place, more on that later)

There is no coronograph like in the Ticwatch Pro 3 to hide the large bezel around the screen. Also, there are two buttons on the sides of each watch, but they are more refined on E3. The rubberized straps are comfortable to wear all day long.

Despite their chunky built, both watches are undeniably lightweight and comfortable. Compare the 32g weigh of Ticwatch E3 and 42g weigh of Pro 3 to the Galaxy Watch 3 at 48.2 g and Apple Watch Series 6 at 47.1. Ticwatch E3 swipes 2.5 Glass for Gorilla Glass protection found on Pro 3. The latter is more resistant to scratches and is swiping-friendly.

Both these watches are suitable for pool swimming (IP68 Rated Watches). We could only wish that Mobvoi had continued with its tradition of Military Grade Standard Approval like in Ticwatch Pro Connected.

In the display department, Ticwatch Pro GPS is a better watch by all standards. Its 1.4-inch 454 x 454 display is very crisp, bright, and responsive to the touch. Plus, it has got the ambient light sensor (missing on Ticwatch E3) to automatically adjust the brightness with respect to the outside environment.

In contrast, Ticwatch E3 offers a 360-by 360-pixel display that is nestled within the face of the watch, which measures 1.3 inches.

There is a remarkable difference in screen technology. Ticwatch Pro 3 offers a dual-screen: An AMOLED panel with a transparent Film Compensated Super Twisted Nematic (FSTN) LCD. It helps the watch to prolong the battery life. On the other hand, Ticwatch E3 has an unimpressive TFT LCD display mostly found on underbudget watches.

In short, Ticwatch E3 has made several trade-offs in the display department, but that is not the deal-breaker for many. Ticwatch Pro 3 offers more, but then it costs $100 more.

In comparison, Ticwatch E3 beats Pro 3 with a slight margin as far as health and fitness tracking is concerned. But you should keep in mind, Mobvoi lags far behind the pioneers like Garmin, Samsung, and Apple in this department.

Starting with the sports mode, the E series watch offers 8 more modes including advanced ones like High-intensity interval training (HIIT). Speaking of which recently released Garmin Venu 2 has also added this feature and it is better than both watches we are comparing here.

You should take the data during sport tracking with a pinch of salt. These watches also disappoint in GPS tracking and auto-detection of exercises. The position tracking needs a lot of improvement and it is simply difficult to understand why there is a huge discrepancy when you compared it with standard devices (Given both watches have all of the available GNSS).

For health tracking, Mobvoi added its suite of apps each starting with Tic (For instance, TicOxygen, TicPulse, and TicZen). Excluding ECG monitoring present in only a handful of watches, these watches seem to offer anything you can find on the premium Apple, Samsung, or Fitbit wearables.

There is sleep, stress, heart rate, blood oxygen, and even noise level tracking in both watches. However, Ticwatch E3 is better (even if only by a fraction). You can take continuous and On-demand readings for Heart rate and SpO2 on both watches.

You can view your data on the watch or the companion app which is notorious for being redundant and cumbersome. Also, it is annoying to sign up with ‘Mobvoi Services’ before your get access to advanced data. Rather than giving you a detailed account of your exercise and health data, the smartphone app is a home for Mobvoi services, adverts, and a store.

So if you are buying these watches for sport and health tracking, you should look elsewhere. Maybe brands like Garmin, Fitbit, and Suunto offer you a product for your needs, but keep in mind they also demand top dollars for it. Despite their shortcoming, Ticwatch E3 and Pro 3 make an attractive option for casual fitness and health tracking.

In terms of smartwatch features, both these watches are almost identical in performance in features. As mentioned earlier, they are the only watches with the latest Snapdragon Wear 4100 chipset. You should not take it lightly. According to Qualcomm, and we quote here:

“The Wear 4100’s quad-core CPU boasts a 1.7GHz clock speed which can boost the performance of wearable by 85% compared to the Wear 3100. In addition, there are also big improvements to the GPU — reportedly 2.5x faster — and increased power efficiency resulting from the shift to a 12nm process, as well as additional optimizations.”

So the Mobvoi might disappoint you in the design department, but shouldn’t doubt the sheer power these watches have with the Snapdragon Wear 4100 chip, 1 GB RAM, and 8 GB storage. You can store music on the watch, but we recommend not using the built-in speaker to listen to songs. The speaker and mic pair are there to make interact with the Google Assistant.

Despite its shortcomings, Wear OS has a wide selection of apps second only to Apple’s Watch OS. So you would get access to Google’s wider ecosystem (Google Pay, Google Fit, Google Music)and also to thousands of third-party apps like Spotify, Telegram, Dexcom, Lifesum, and Nike Run Club. Plus, there are plenty of watch faces both by Mobvoi and Third-party developers to choose from ( You can download them from the play store).

Thanks to the powerful chip, there is a smoothness to the UI animations and fast transitions between different apps. (Surprising because no other Google-powered Watch can offer the same). Comparing both watches side by side, you won’t be able to spot any major differences.

Ticwatch Pro 3 if you consider the 4G/LTE variant does have an advantage in connectivity. It can make calls, send texts and emails and thus offer you a true standalone experience. Also, its large display allows it to display more items in a single view.

So in this space, both watches are almost equally blessed and powerful.

We hope that you get the gist of the battery performance of both watches.

One of the downsides both these watches share is the pogo-pin connector which more often than not gets disconnected. A cradle would have been a better choice. Despite the magnetic connectors, it is just too easy to detach from the back of the watch accidentally.

Battery performance is the department where Ticwatch Pro 3 shines above E3 and so far all other WearOS watches in the market. The 577 mAh battery takes a lot of space (the bulky design of the watch is understandable), but it enables the watch to deliver on its performance of 3 days on smartwatch mode and 45 days on essential mode. You should credit Galaxy Watch Active 3 here which delivers the same with a small battery size almost equal to Ticwatch E3, or blame the WearOS for its siphon battery juice more than any other feature.

The essential mode on the Ticwatch Pro 3 takes advantage of its low-powered bare-bones monochromatic digital watch-style always-on display. Don’t take it lightly, as it shows far more information than battery-saving display modes on other smartwatches. For instance, you will be able to access heart rate, oxygen saturation, step count, and sleep monitoring data.

Ticwatch E3 lags far behind and is a one-day watch. However, if you are more conservative with usage, you can easily squeeze out 2 days of performance at most.

Ticwatch Pro 3 Vs Ticwatch E3: Which One Is Right For You?

While both watches offer almost identical features, the one big difference is the price. With $100 less, Ticwatch E3 would be what we would prefer. But if you can’t live with short battery life, dull display, a bulky design, and Plasticky feel, and are willing to pay extra for these, Ticwatch Pro 3 is a better option. Also, it has an LTE variant that can unlock the potential of the watch as a truly standalone device.